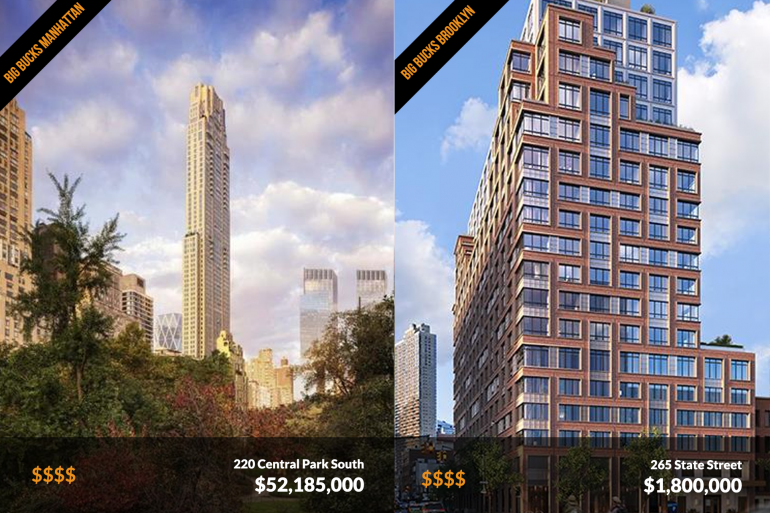 The highest recorded closed price for a Manhattan apartment for the week of March 29 was Unit 62 at 220 Central Park South.  The new supertall looms over the southwest corner of Central Park just as Columbus Circle rolls on CPS.

As you may remember, this highrise is also home to the highest priced residential sale in the country’s history.  In January 2019, hedge funder Ken Griffin plucked down a whopping $238 million for a 24,000 square foot residence.  To date, there have been eleven sales north of $50 million; nine of these sales have been for more money than this particular sale.

In a short time, 220 CPS has become the preeminent address in NYC, perhaps even supplanting the nearby 15 Central Park West.  The 79-story limestone tower, developed by Vornado Realty Trust and designed by the celebrated architect Robert A.M. Stern (also of 15 CPW fame), has attracted the uber wealthy from near and far.

Unit 62, a 5,935 square foot full-floor condominium, which sports spectacular views in all directions, sold for $52.185 million.  The price reflects an average per square foot price of approximately $8,792. Take a moment to catch your breath here.

This eight-room residence features an unimaginable expanse of more than 120 linear feet perched high above Central Park. Your home, short of a pane of glass, becomes one with the city’s most precious gift.  Five rooms, the living room, dining room, library, kitchen and master bedroom all face north; the kitchen and master bedroom, at either ends of the floor, are corner rooms with double exposures. Both the library and the dining room have balconies from which you can test your nerve.

Upon entering the residence off the private elevator lobby, there is a gracious foyer that leads one’s eyes beyond the living room and toward the park panorama.  Two galleries on either side of the foyer lead in opposite directions, one to the master bedroom wing, the other to the kitchen wing. The library and the smallest of the four bedrooms reside on the wing with the master suite.  The kitchen wing contains the formal dining room, a pantry/wine room and two more bedrooms, each with an ensuite bath. There is also a utility room with a washer dryer and half bath, accessible via a service entrance.

We’re going to take another deep breath before we lay out the Master Bedroom Suite, a wondrous space for two people who never want to see each other – or at least not during AM wake-up and dress time.  The wing occupies the entire north/south width of the apartment and delivers not just one master bath, but two, each with its own dressing room. Both baths have west-facing windows and everything one needs to luxuriate with full privacy.  There is even a “morning kitchen” as you exit the bedroom.

The kitchen, as you might expect, is lavish in every way.  Flush with light from multiple exposures, the kitchen features an eat-in marble island, marble countertops, custom millwork with glass and chrome cabinetry and a Miele and Sub-Zero appliance package.

Deborah Kern of Corcoran represented the building in this transaction.  For more information on the property or 220 Central Park South, please visit Linecity.

Meanwhile in Brooklyn, the highest recorded sale for the week of March 29 was at the Boerum, a hybrid development at 265 State Street in in Boerum Hill.  The Boerum, which is also home to the Hilton Brooklyn New York, now anchors the western end of this picturesque block of pre and post-war townhomes.

Apartment 1110, a light-filled two-bedroom, two bath apartment with sweeping views of Downtown Brooklyn took the honor in this otherwise show week of sales.  The recorded price for this four-year old condo was $1.8 million, about $1403 per square foot.

The apartment enjoys a split bedroom layout with an open living/dining/kitchen area.  A fifth room, partitioned by sliding glass doors, serves as an office and contains a custom Murphy Bed as well.  The master bedroom has an ensuite marble bath with double sinks and a large walk-in-shower.

The Boerum opened in 2016.  The building offers a nice array of amenities, including a landscaped terrace off the 15th floor with a south-facing sundeck, outdoor kitchen and lawn.  Transportation, culture, shopping and culinary treats of every kind are within easy walking distance.
Apartment 1110 was introduced to the market in April 2019 for $1.95 million and went to contract in January 2020.  The sold price represents an 8% discount off the original ask. Alexander Maroni and Jed Klebanow of Douglas Elliman represented the seller.  Should you wish further information on the property, you can visit Linecity. 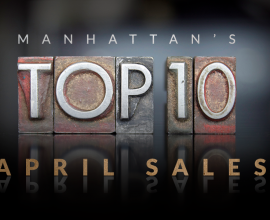