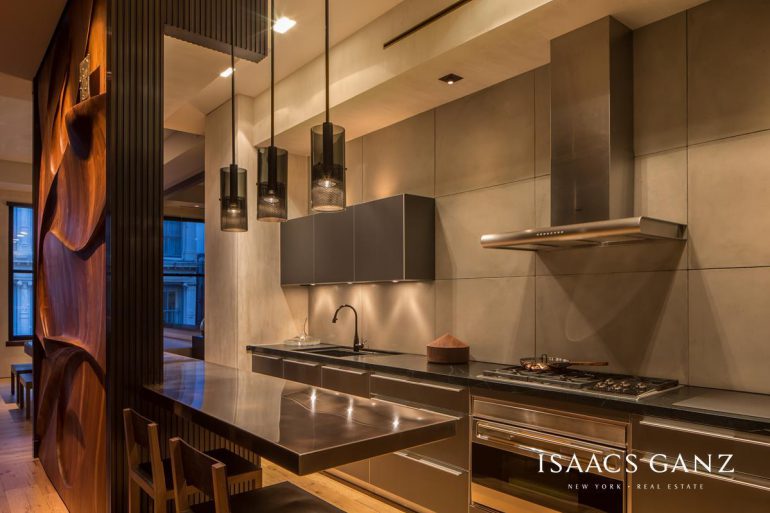 In our search for the most magnificent New York City apartments, finding something truly unique can be a challenge. Across the great metropolis there are thousands of stunning apartments. But after a while, many begin to look the same despite some subtle differences;  a lot of them tend to have a same-same approach to their layout and interior design style.

Well today’s selection for our “Apartments We Love” feature is definitely different, even spectacular.  Located at 92 Greene Street, in the heart of Soho’s Cast-Iron Historic District, Apartment 5A is a duplex-styled residence that offers a breathtaking palette of materials that juxtapose to create a wondrous museum-quality home.

92 Greene Street is a bit of an anomaly given its Soho location, post-war construction amidst some of the city’s most historic and distinct architecture.  Completed in 2007, the building remains true to the neighborhood’s aesthetic. The structure’s exterior has been designed in the same pressed enamel steel as its forebears, replicating the romanticized cast-iron facades of the late 19th century. The block-through building has elevations on both Greene Street and Mercer Street.  The Greene Street entrance has the benefit of a full-time concierge, another anomaly for this part of town.

In total, there are just 14 units in this boutique condo, adding a veil of privacy to its list of celebrity residents.  LIndsay Lohan and Rihanna have both called 92 home.  But enough about the building, let’s get to the real star of the show, 5A.

This heart-stomping loft residence is the work of famed architect/designer David M. Sullivan. Sullivan spent three years meticulously detailing each and every nook of this home with his signature design style. It’s hard to know what exactly to call the design.  On the one hand, it’s got a sort of art-deco vibe, while on the other it feels modern but with a touch of bohemian style. Sullivan has been custom designing apartments like this for years and really has developed a style all of his own.

The great room is the piece de resistance of this fine home.  Step into this open expanse and you are immediately stuck by the rays of sunshine that stream through the west-facing windows. The view across Greene Street is pure Soho, cast-iron buildings and rows of classic water towers.   Inside, the feel is contemporary.  Fourteen foot tall ceilings add volume to the space, a floor-to-ceiling beveled bronze wall dares you to look away.  The wall stuns as an architectural element and also conceals a television and fireplace.

The three-bedroom residence measures just short of 2200 SF and every detail contains the Sullivan signature.   Many of the furnishings, some from the architect’s personal collection, have been sourced from across the globe for a truly cosmopolitan feeling. Not surprisingly, this home has been featured in Architectural Digest.

The kitchen, while open on both ends, is a bit atypical for a New York City loft. But Sullivan dares to be different. There is no center island; instead there is an exquisite floor-to-ceiling wood carving that separates much of the kitchen, and any mess, from the great room.  This sleek space shines not only from its ultra-modern design, but by the arrangement of materials used on every surface.

The remainder of the floor consists of two smaller bedrooms, one now used as an office, a laundry room, a full ensuite bath and a powder room.  The office has a wall of impressive builtins. The bathrooms are designed with the same flair and attention to materials used throughout the home.

The master bedroom suite is its own private sanctuary on the second level.  The highlight of the floor is the sumptuous master bath, particularly the floor-to-ceiling textured stone that adorn the walls.  The five fixture bath features a deep copper tub, a sensational walk-in steam shower, a double vanity and a private loo.  Why ever leave?

Overall, it’s a magnificently designed home. Sullivan’s unique style pervades throughout. Nothing ordinary here.  If you are looking for a truly special home, one which will awe and inspire your friends, this is a space to consider.  As a postscript, the condo also hired Sullivan to redesign the building lobby in the same showman style as apartment 5-A.

This one-of-a-kind residence is being offered at $4,995,000 by Karen Atzlan and Trish Riedel of Isaacs Ganz Real Estate.  For a more detailed look at 92 Greene Street, 5-A, visit Linecity.com. 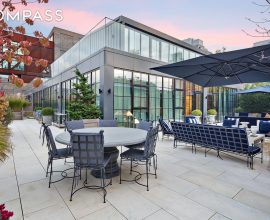 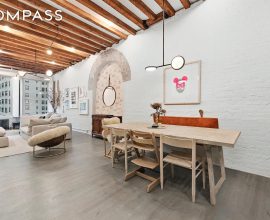 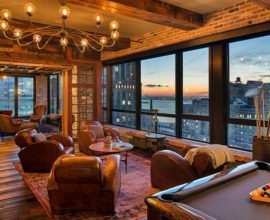 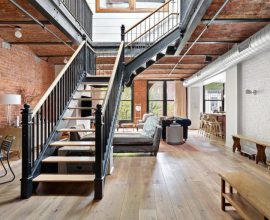