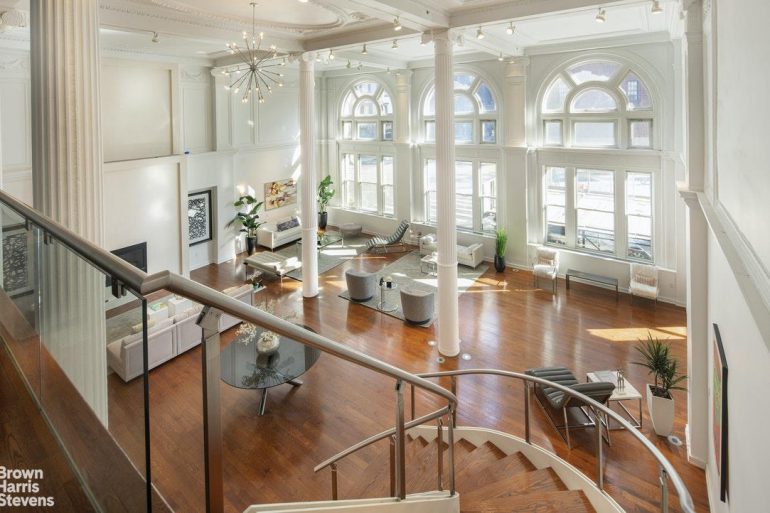 Enter this cavernous apartment and one wonders if they’re in the right place.  Perhaps you took the wrong door and wound up in the building’s ballroom.  The great room of this Tribeca residence stuns by its sheer volume.  And this is just one reason why this exceptional space has been added to our “One Room” series.  We’ll get to the second reason further on.

The great room for Apartment 1/2C at 260 West Broadway, the iconic American Thread Building, is enormous by any standard. Even, the actual measurements, some 45×45 with soaring 26-foot tall ceilings fail to embrace the énormity of this loft.  One needs an actual eye test.

Anyone familiar with downtown Manhattan knows of the American Thread Building, the architectural masterpiece that hugs the corner of Beech Street and Broadway with its curved façade.  Built in 1896 the landmarked building was erected to serve as a prominent homebase to the wool industry, no different than other buildings that have served the various trades.  In 2001 the building was converted to condominium ownership, one of the first Tribeca residential conversions.

From every angle, this room shocks and awes.  It is filled with architectural elements, including coffered ceilings, fluted cast iron columns and extensive moldings.  A wall of arched windows front West Broadway and allow for endless streams of light.   A custom steel staircase winds its way to the mezzanine level and the sleeping quarters.  A contemporary fireplace adds a sense of calm.

The second reason for which we love this room is the original Keith Haring mural which is painted directly on the wall above the foyer.  Haring painted the apartment wall in 1979 while attending art school.  Rumor has it that the mural was discovered years later during a renovation of the space.  Few, if any homeowners can claim an original wall mural by such an iconic artist; the problem is that you can’t take it with you.

The loft totals 8000 square feet and is spread across three levels.  Aside from the great room, the main level is home to an eat-in gourmet kitchen, a formal dining area and a powder room.  The lower level, which also enjoys a separate entrance, is predominantly used as additional entertainment space, but can legally be used for live/work as well.

There aren’t many homes that offer more of a loft feel than this Tribeca residence.  While we’re not quite sure how one would change the lightbulbs in the great room, this apartment is certainly one-of-a kind by anyone’s standards.
Apartment 1/2C at 260 West Broadway is currently listed at $7.995 million, about $999 per square foot. It is being represented by Lisa K. Lippman and Gerard Moore of Brown Harris Stevens. To learn more or take a peek visit Linecity.com. 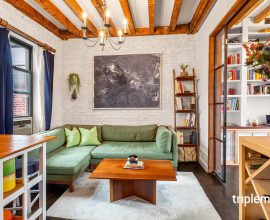 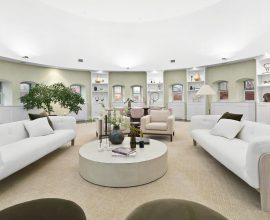 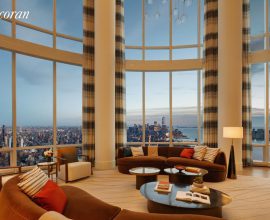 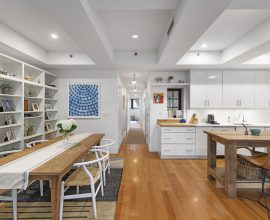