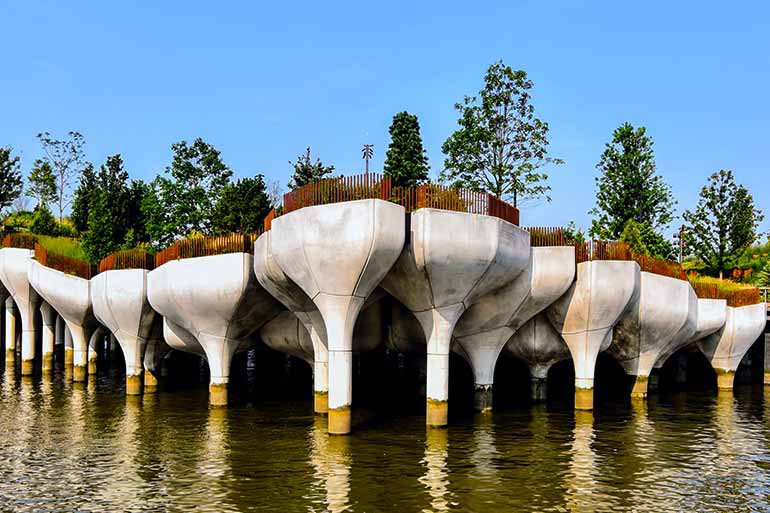 A Little Island Sprouts Out of the Hudson

It’s hard to miss the futuristic tulip-shaped columns rising out of the Hudson River just below 14th Street. There is nothing quite like it in Manhattan. At first glance, it could pass as a miniature golf course, new theme park, or even a space station rather than a floating verdant garden. It’s Little Island, one of the most imaginative parks in New York City and it’s now open to the public.

Sprouting from the remnants of the old Pier 54, the 2.6-acre park took nearly seven years to build partly because of its one-of-a-kind aesthetic. A complex design of 132 tulip-shaped pots resting on concrete pillars created the park’s undulating topography. Each concrete tulip shape was formed in Greenwich, New York, assembled on land, and then floated down the Hudson River to the Little Island site. If you look closely you’ll see a natural waviness in the island and a slight rise in the southern end of the structure. It’s not a flaw. It’s an intentional design to resemble a floating leaf.

World renowned designer Thomas Heatherwick (The Vessel at Hudson Yards) worked in partnership with the global engineering firm Arup and landscape architecture MNLA to bring this whimsical urban park to New York City. Separate from the larger island of Manhattan, the park aims to create a green oasis for New Yorkers to use as a retreat and escape the madness of urban life.

With rolling hills, winding paths, open lawns and rocky outcrops, the landscape architecture is guaranteed to make the grittiest New Yorker pause, take a deep breath, and at least for a minute or two, relax. Winding footpaths are designed to make visitors slow down and linger awhile. Yes, that does sound a little counter culture to NYC but if you’re going to wind down anywhere it should be here. With 35 species of trees, 290 varieties of shrubs, native grass, perennials, vines and 66,000 planted bulbs throughout the park, you’ll definitely heed life’s advice and stop and smell the flowers; it’s worth it.

Each corner of the island was designed by a different landscape architect which created different textures and microclimates within the park. Plants and flowers were carefully selected for their fragrance, color and their ability to attract pollinators, which is key to a healthy environment. Since Little Island is a year round park patrons will experience flowering trees and shrubs in spring, perennial displays in summer, foliage and grasses in fall and evergreen trees and shrubs in winter.

Besides nature, visitors can also get a healthy dose of culture and art. A 687 person amphitheater sits against the backdrop of the Hudson River and offers music, dance, circus, spoken word and other performances. There is also an artist in residence program that gives New York based artists the ability to produce, perform and curate events within the park. What’s an island without sustenance? Food stalls within the park offer beverages and a variety of food choices. Wine and beer is sold during the evening.

The cost to build Little Island was $260 million. The park was commissioned by media mogul Barry Diller of the Diller-von Furstenberg Family Foundation and the Hudson River Park Trust. Little Island brings together art and nature in an immersive experience. It is the first new park to open in the city since the pandemic and it’s a must see. 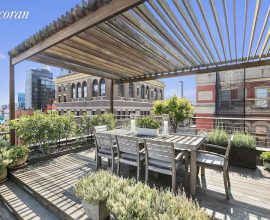 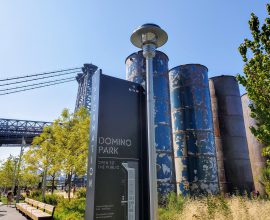 Sweet Dreams are Made of This – Domino Park 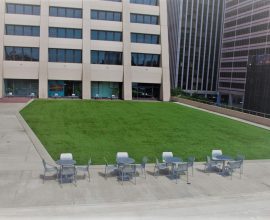 One Of The City’s Best Kept Secrets – Elevated Acre Park 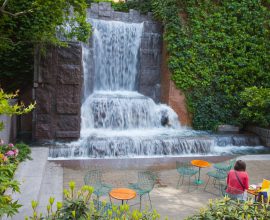