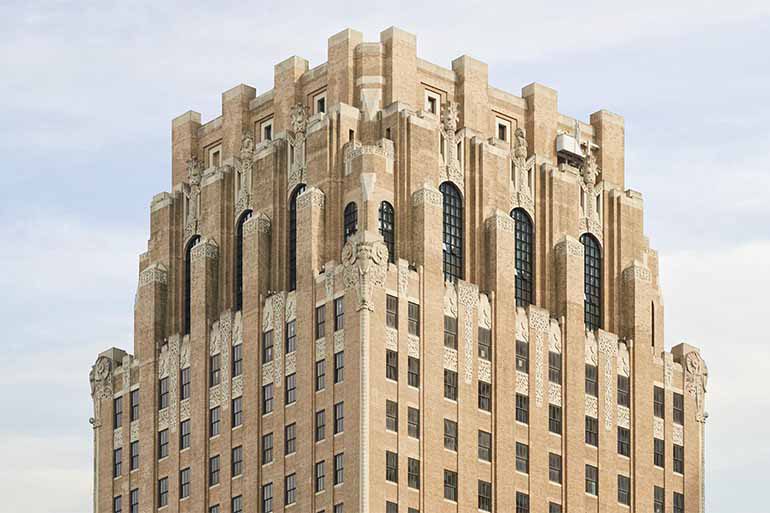 Manhattan can be defined as a city of sharp contrasts, particularly when it comes to architecture.  Yesterday’s wonderment stands small against the skyward towers of today.

From the turn of the century through the 1920s, the skyscraper increasingly became part of the downtown landscape.  Every few years, a new structure edged a few floors beyond yesterday’s newest and tallest tower.

Today we single out 100 Barclay Street, a landmarked art-deco structure designed by the celebrated architect Ralph Walker as the newest edition to our “Apartments We Love” series.

The 32-story brick edifice was one of the city’s first modern skyscrapers when it opened in 1927 as the headquarters for the New York Telephone Company.  The hulking structure was significant not only for its height, but also for its multiple setbacks, a new aesthetic of urban design.  This grand endeavor was Walker’s first commissioned project while he was an associate at the firm of McKenzie, Voorhees, and Gmelin.

The building has retained a commanding presence despite standing in the shadow of One World Trade Center.  The base, which rises ten floors, occupies an entire city block.

Walker also had some fun with the design, adorning multiple sections of the exterior, including the panels over the front entrance, with elaborate carvings of animals, flowers and children.  If you want to hone in on this detailing, we suggest a pair of binoculars.

Like many older buildings in the city, 100 Barclay Street has been rebranded over the years. When completed, it was commonly referred to as the “Barclay-Vesey Building” due to the north and south streets that border the property. Barclay-Vesey soon gave way to the “New York Telephone Building” due to the fact that New York Telephone occupied the structure.  Prior to the residential conversion of the upper floors the building was known as the “Verizon Building,” one of a litany of phone companies that occupied the property once New York Telephone moved out in the mid 1980s.

Today, the mixed-use building is simply known as One Hundred Barclay and contains a mix of luxury condominiums and operational facilities for Verizon.  Built in 1927 and converted into a condominium resìdences in 2016, One Hundred Barclay rises 32 floors and contains 157 apartments. The residential apartments begin on the eleventh floor while the lower floors are occupied by Verizon.

The 6,000 square foot grand lobby at One Hundred Barclay is pure opulence and it runs the length of the entire building. It feels more like a long corridor than a lobby but it’s stunning just the same.  The marble walls, travertine floors, detailed millwork and exquisite ceiling murals made us feel like we were walking through a wing of The Metropolitan Museum of Art.  Each mural represents the continued progression of communication through history.

The building is serviced by a full-time doorman and concierge.  It offers more than 40,000 square feet of amenities including multiple outdoor terraces, a residents lounge with dining room and bar, billiards room, children’s playroom, teen lounge, media room, music practice rooms and a wine tasting room. There is also a gym and an 82-foot lap pool with an additional kids pool.

Currently, there are eight availabilities at One Hundred Barclay. Two bedrooms start at $2.75 million, three bedrooms at $5.175 million, and four bedrooms at $7.5 million. The average price per square foot is $2,162.  There are a few sponsor units available through Tara King Brown at Corcoran as well as a handful of resales.

To learn more about One Hundred Barclay visit Linecity. 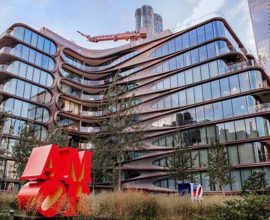 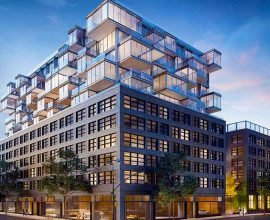 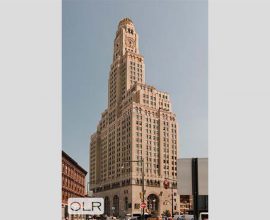 A Monument to Brooklyn Past – One Hanson Place